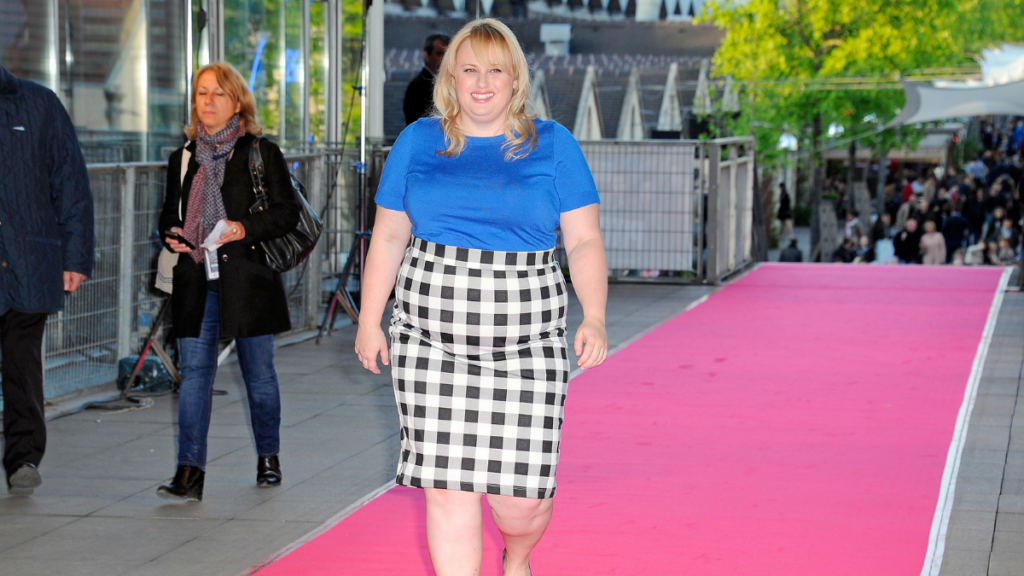 Gaining or losing weight shouldn’t be anyone’s business in this day and age, yet it’s exactly what’s catapulted Rebel Wilson to the forefront of celebrity press coverage these days.

She’s always been a wildly talented and funny performer, but to only recognize her for her stark body transformation signals something more insidious and harmful about Hollywood and our culture at large. Of course, this isn’t a surprise to anyone — fatphobia and its countless manifestations have prevailed in society for a long time. Our entire worth is evaluated upon whether or not we have cellulite, and if we manage to convince someone we don’t, they will start running down the list and find something else to fixate on.

We’re conditioned to think losing weight is the key to unlocking the best version of ourselves and that it’s the ultimate source of both health and happiness. However, does weight loss really signify fulfillment and self-confidence? Everyone’s journey is different, and Rebel Wilson has her own perspective on whether losing the pounds can lead to something more.

Rebel has always seen her body as an “advantage” in comedy

One thing to note straight away about Rebel Wilson is that she’s never felt inferior due to her weight. After all, her breakout role was ‘Fat Amy’ in the 2012 film Pitch Perfect, where her character explicitly says she’s added the prefix ‘Fat’ before her name, so “b***hes like you don’t do it behind my back.” This may not be a direct reflection of her own stance, but it does demonstrate her self-awareness and agency in regard to her body.

Throughout her career, the Australian actress has been candid about what her body means to her and how it’s essentially allowed her to enter and flourish in comedy. Instead of avoiding the conversation, she has deliberately poked fun at her dimensions time and again, centering her humor around being fat and the occassional hijinks it leads to. She has taken full ownership of her body and has prided herself on her ability to thrive in an industry that consistently puts thinness on a pedestal.

I took something that was seen as a disadvantage – no one thinks, if you’re fat, that you’re going to be an actress and everyone’s going to love you – and turned it into a positive. And bigger girls do better in comedy…

Rebel told The Daily Telegraph in 2016 that her size has always been an “advantage” to her, “whereas so many women see it as a disadvantage.” In fact, she observed early on that it’d been bigger women finding success in the stand-up scene, those who were willing to ridicule their bodies for the sake of entertainment. She recounted an amusing incident from years ago where she felt outshined by a woman “fatter” than her, so it occurred to her that being fat could work wonders for her fledgling comedy career.

The Isn’t It Romantic star also shared she suffers from hormonal imbalances, which means her body has a natural tendency to accumulate more fat than the average person. At the time, she was asked whether she would ever take an intense weight loss journey; though she didn’t rule it out, Rebel assuredly replied that she doesn’t need to be skinny to be valued as an actress.

Most actresses hitting their thirties or forties have to fret about meeting a certain beauty standard lest it costs them an opportunity. “That’s why people do crazy s**t to their faces – out of desperation to look younger,” she said. “But I think my career is based more on my personality, so it doesn’t really matter.”She didn’t need to lose weight to still matter as a performer; her charisma and sense of humor would have continued to sustain her financially just fine.

She says it’s never too late to “improve” yourself, and that weight loss isn’t a race or a competition

Over the last year or so, Rebel has been displaying a significantly slimmer figure, raising a number of queries regarding her previous quotes as well as her position on health and beauty. Does this mean everything she’s said thus far about her body stands as invalid? Has she, like most other female celebrities, succumbed to the pressure of meeting a harsh aesthetic demand? Were all the empowerment speeches simply platitudes and didn’t actually mean anything?

Absolutely not, because Rebel herself makes it clear she didn’t just pursue this intensive weight loss journey to appear more conventionally attractive and desired. She went on this path because she realized she’d been engaging in detrimental practices to cope with pain and poor self-esteem. “My father had passed away of a heart attack and it was such a sad time,” she told her Instagram followers in an emotional post.

She didn’t think “highly” of herself, and while suffering from neglect and self-loathing, she turned to food to “numb” her emotions.

It wasn’t just her mental well-being that spurred her to hit the gym and eat more wisely. The 41-year-old wishes to be a mother in the future and would like to go through the process of freezing her eggs. “If I lost some excess weight, it would give me a better chance for freezing eggs and have the eggs be a better quality,” she explained in an Instagram live. At first, she wasn’t even focused on herself; she was just thinking about a “mini-me” in the future. Over time, she started gaining an appreciation for fitness and how it’s empowered her to feel more authentic and self-assured.

I didn’t think highly of myself and wasn’t valuing myself how I should have […] I look back now at that girl and am so proud of what she’s become and achieved.

Ultimately, she encourages her followers to not stress about their bodies and take their time to improve them. It’s never too late to change course and move your life in a different direction. She says it’s not a race or a competition; you’re only fighting for yourself and the respect you deserve. Most of all, Rebel understands the challenges, and she’d like to extend solidarity to anyone going through “weight or body issues or emotional eating.” Moreover, she urges them it’s never too late to improve your life and start respecting yourself in the way you deserve.

Go on your journey for the right reasons

Rebel’s transformation carries a critical lesson for most: it’s never too late to take charge and work on your health. This could be physical health, mental health, spiritual health – the list goes on and on.

Do it for the right reason, and there’s no way you will be anything less than proud and ecstatic of your progress. Every change is a milestone, and every milestone is an indication you’re bettering yourself, not just externally but internally. At the same time, be patient with yourself, and don’t be too hard on yourself if you don’t see results right away. Confidence isn’t something you can conjure out of thin air; it’s an odd feeling that comes and goes as it pleases, so take everything one step at a time and enjoy the adventure while you can.