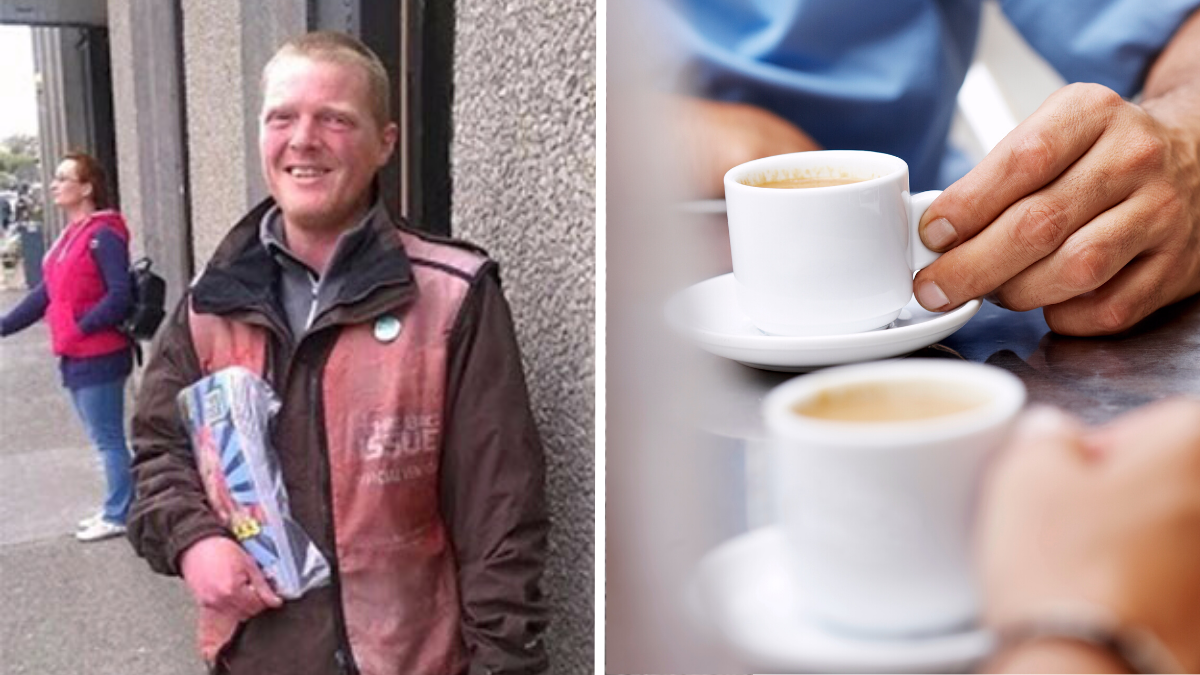 Homelessness is a phenomenon that can feel far away for most of us, but is sometimes closer than we think. All it takes is one bout of bad luck, an illness, or a job loss. It can be easy to judge those who find themselves living on the street, but it should be even easier to show the less fortunate some kindness.

This was the case with Joe Wilson, who would stop and chat every weekend with a homeless man who stood outside of his favorite weekend breakfast spot.

One of Joe Wilson’s most treasured weekend rituals is grabbing a special breakfast from his go-to cafe in Glasgow called Old Salty’s. Each time he goes to pick up his breakfast, he buys an extra coffee, which he gives to a homeless man who sells a magazine called Big Issue, outside of the restaurant. The man, named Daniel, and Joe chat every weekend, and have developed a friendship over time.

Before falling into homelessness, Daniel was a chef. Unfortunately, he lost his job and was living on the streets selling magazines to get by.

Joe is such a nice guy, he comes down every week and always comes over for a chat and buys me a coffee. He isn’t a rich guy or anything, he is just a brilliant, kind man.

One Saturday morning, Joe went into Old Salty’s as usual to get his special breakfast, when he was told by the cashier ringing him up that his meal had already been paid for– by Daniel! Joe was stunned, but still bought Daniel his usual coffee. Joe thanked Daniel, who was smiling ear to ear, for his kindness and generosity. Daniel told Joe that he had won some money from a scratch lottery ticket, and he had decided to use his winnings to treat Joe for all of the kindness he had been shown throughout their friendship.

Joe was stunned when he later learned that Daniel had not actually won any money, he had been putting money aside to be able to show Joe how much he appreciated his weekly chats and coffee.

Today, I did the same as usual but when I went to pay for my breakfast, the girl in the cafe told me it had already been paid for…by Daniel. He’d won £20 on a scratch card and decided he was going to treat me for a wee change.

Even though Daniel barely makes enough to get by, he wanted to show his appreciation for the kindness shown to him. We can all take a cue from Daniel and be more thoughtful about how we show our love and gratitude to those who improve our lives.

One thoughtful gesture can make a long lasting impact on someone’s life.

The Demons In The Background – Motivational Speech on Depression
Why Fibromyalgia Is the Greatest Gift of My Life
Lawyer ‘flooded’ with calls from Canadian couples on ‘Divorce Day’
How Boys Learn to Repress Their Feelings and How We Can Do Better as Men
Podcast: Our favorite daily habits